Isabelle loves water.  She loves her baths, she likes drinking the stuff and she oh so certainly enjoys having a shower with her mum if the screeches of delight and face pulling are anything to go by. I kind of get the feeling she might explode if she saw a log flume or an advert for Center Parcs, perhaps we’ll break her in gently with that waterslide scene from BMX Bandits or something.

Clearly its a case of Psycho, Schmycho when it comes to showers and having a touch of the water as it shoots down, what fun isn’t there to be had. It’s a great place for ideas apparently as well, as Arthur C Clarke claimed he had most of his good ideas in the shower, one thing is for certain you certainly can’t beat a hot shower, ideas or not. 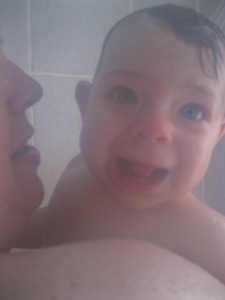 I’m sure that Isabelle would have stayed in there until she was all shrivelled up and looking like an old, or is that young, Benjamin Button. It remind me of the fun we used to have on the back garden at mum and dad’s with the sprinkler. The water was always ruddy freezing but that mattered not to me, my brother and Paul and David Barton in our so fashionable speedos from many a moon ago, complete with swimming badges sewn on them no doubt. Cue lots of smiles interjected with the chattering of teeth due to the cold water.

And of course, the best thing about a hot shower is the getting dry afterwards, which means bringing out the big guns (or should that be big good shaped thing) in the form of the hairdryer. Quite literally it’s a blast. Missy also loves nothing better than a blast of the dryer and you can see her here waiting patiently, well patiently for a rather impatient dog. No wonder lots of women spend so much time getting ready if they spend all their time larking about in the shower and mucking about with the hairdryer. Rumbled!*

*please note that last comment was made for allegedly comedic purposes and does not reflect the thoughts of this author regarding women and how long they take to get ready.