Once we had escaped Peppa Pig World – thankfully no Westworld style shenanigans went down – we found ourselves come face to face – or should that be face to foot with dinosaurs. Being a fan of George, Isabelle knew what a dinosaur was and what noises they make (in films anyway).

I think Isabelle was overwhelmed by the sheer size of the models more than anything else. I think every child has a soft spot for dinosaurs – certainly I fondly remember ‘seeing’ some at a Dinosaur Park in Colwyn Bay one family holiday (it must have been 1987 as I remember it being the birth place of Timothy Dalton who had just had his first Bond film released, The Living Daylights) and having my pic taken with them all, especially with my favourite, the Triceratops.

It turns out that this giant beast before us at Paultons Park was just the beginning as we all entered under a sign and down a secluded path that transported us back 60 million years (and we thought we had done a lot of mileage that week already what with us driving up to Notts, then Northumberland and then back to Notts and finally to Southampton).

With the weather being a tad grotty and a bit muddy it added to the whole atmosphere and as we made our way through we came across a whole host of beasts that once ruled the Earth, yes, including my still firm fave, the Triceratops (well he is vegetarian as well).

The secluded path reminded me somewhat of one of the sets from the much derided – but why didn’t mind it – A Sound of Thunder – needless to say we checked our shoes for any giant butterflies we might have trodden on – If you are familiar with the Ray Bradbury story you’ll know what I mean.

Sort of sticking with that cause and effect idea on our journey ‘back in time’ we also discovered what wiped out the dinosaurs…cigarettes!

Dinosaur, as we all know, is Latin for terrible lizard and with Isabelle’s rather impressive impression of a dinosaur I think we can say that she didn’t make a not to terrible Iz-ard.

Dean Newman continues on his musical journey with John Barry expert, Mike Copping, as he talks about two of his favourite Barry scores. 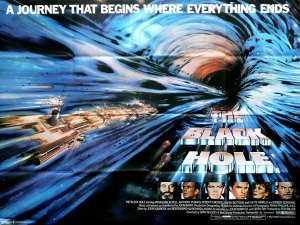 MC:     The Black Hole for me is one of Barry’s best, although I know a lot of people don’t like it but from a from a Barry fan’s point of view it was one of those scores that seemed to cross over to the people who loved Jerry Goldsmith or John Williams, it crossed that kind of bridge where a lot of his work just doesn’t. Incidently The Black Hole was the first digitally recorded film score with Star Trek: The Motion Picture, by the aforementioned Goldsmith was hot on its heels. Sadly though, because of its rather dubious reputation and it wasn’t quite as successful as the first Star Trek film so the master tapes are perhaps not as well looked after as those stored at Paramount, which is a crying shame.

MC:     From Bond you would have to include Goldfinger as apart from its impact in the film, that is the album that knocked The Beatles off the number one slot in the US, a soundtrack album knocking The Beatles off number one is just plain crazy, but it happened.

Like many elements of that film the music also pretty much set the standard and was the blueprint for every ensuing Bond adventure since. That was where everything gelled. Monty Norman had written a score for Dr No that Terrence Young (the Director of Bond’s first outing) called ‘mining disaster music’, a phrase which I love, and of course Barry’s total restructuring of the Bond theme firmly established something that had never been heard of before and was completely fresh.”

Although Monty Norman wrote the Bond theme he always credits Barry with creating the definitive arrangement, but my own personal feeling is that Barry created more than just an arrangement, he extended the melody and created the bee-bop section and all that.”

As the title suggests the thing that makes James Bond forever James Bond, over and above everything else, is not the actor, it’s that score.

David Arnold himself, who is obviously Barry’s replacement, has said that without the music it is just another action film. True there are various Bondian elements such as M, Moneypenny, the gadgets and the globetrotting, but so many films do that these days so the music adds tremendously to the whole character and atmosphere of the thing.

We also have to remember that Barry was also responsible for the title track, sung by Shirley Bassey, again creating the quintisential Bond theme that all

others are in the long shadow of.

Because of all of that it has to be Goldfinger, but from a personal point of view I would have said The Living Daylights, Barry’s Bond swansong, or On Her Majesty’s Secret Service.”

Musically, at least a lot of the Bonds take place outside of what was happening at the time so Barry was almost working in his own bubble but setting trends at the same time and being very influential because it worked.

Put simply, that is one of the reasons the Bond films are so successful and why they are still making them. The music’s importance should not be underestimated.

DN:     Barry never did return to the Bond franchise, bowing out with an exceptional score to Timothy Dalton’s debut, The Living Daylights (1987), but he did ensure that his musical legacy lived on and helped shape Bond for a new generation  personally recommending David Arnold, who had previously worked on Stargate and Independence Day, to Bond Producer Barbara Broccolli for Tomorrow Never Dies (1997) a score that is largely Barry in tone and feel, something that Arnold, who has helmed the music for the series ever since, has returned to with flashes of Barry in The World Is Not Enough and Casino Royale.

MC:     If you look at his first Bond venture,Tomorrow Never Dies, that is a blatant emulation of Barry in style, especially the pre-credits sequence. Most of that is pure Barry with its blasts of swaggering brass. Since then Arnold has moved away a little from that and given it a bit more punch, a bit more edge adding synth elements and drum machines etc. But it is something he keeps on returning to with for example the ski sequence in The World is not Enough, which is epic and broad, Vespa’s theme in Casino Royale and of course THAT familiar tune at the very end. Bond is only complete when that theme is heard. No theme, no 007, literally.

DN:     What now for the future of film music and what of Barry’s legacy?

MC:     For the latter half of the 90s and the Noughties melody was out of fashion and above everything else Barry was a melodist, he wrote just fantastic melodies and sadly they’ve been out of fashion for a number of years. It’s only recently with people like Alexandre Desplat, New Moon,  and Michael Giacchino, Star Trek, actually creating thematic scores that have been successful, which has meant they have come back to the fore and has seen them create dense thematic scores and not just ambient tonal pieces with no real structure. 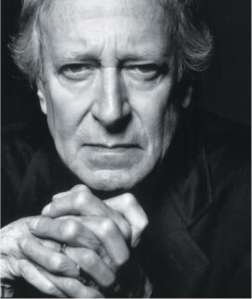 DN:     Barry, who crushingly had not completed a score for a film in over ten years, was what was known as one of the four key silver age movie composers, pretty much helping shape and influence the last 50 years of film music, alongside John Williams, Ennio Morricone and Jerry Goldsmith, who passed away in 2004. You can’t help but feel that wherever Williams and Morricone where in the world a part of them died along with Barry as the fantastic four (or should that be score) of film music became an even more select group.

MC:     David Arnold did once say if you are going to bring someone new in as Bond then you want to surround him as much of the Bondian elements as possible. With that in mind, in spirit at least, the music of John Barry will return.