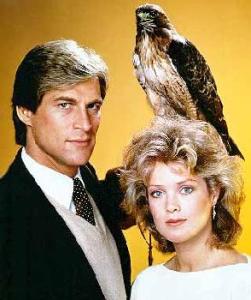 It may have only lasted a meagre eight episodes but for a generation Simon MacCorkindale, who has sadly passed away aged 58 after his battle with Cancer, will forever by associated with his role in Manimal, surely the greatest word ever created. MacCorkindale, who were it not for his poor eyesight was destined for a career in the RAF, instead took flight in another guise, as Dr Jonathon Chase, who took to fighting crime in his human form or that of a panther, falcon or indeed snake, all of which he could magically transform into.

Think one part The Phantom, his dad passes on his powers on his deathbed in deepest darkest Africa, and another The Incredible Hulk and you are part way there, certainly a far cry from All Creatures Great and Small this was crime fighting with cat-itude. Of course being early 80s TV you only got one or two transformations an episode and these were all shown using the same stock footage.

Saying that, for its time and limited budget, it was all pretty memorable and is no surprise to find that Stan Winston had a hand in the creature effects, who famously created the special effects for Aliens, Predator, The Terminator and the T-Rex in Jurassic Park.

See those transformations in full:

And it was the transformations that you watched it for as the crime fighting itself could have been lifted from any number of similar shows at time, such as Knight Rider, Street Hawk or Auto Man, but Manimal had the edge with its An American Werewolf in London-esque change sequences that thrilled my eight year old self, no matter how many times I had seen them, no matter that they were shown in the titles every week, which had some great visuals and an eternally catchy theme, catch it here. http://www.youtube.com/watch?v=Ugb_TIpPoWA&p=EAE1FA1EE5EC0CE7&playnext=1&index=24

I loved the way that the skin on the hands pulsated, almost as if it was breathing, and the way claws would sprout and faces stretch, making Bill Bixby’s green contact lenses and Lou Ferrigno’s clothes  bursting seem tame by comparison. Cue lots of Manimal transformation sequences re-enacted in the school playground!

MacCorkindale’s last major role was that of Harry Harper in Casualty but he never seemed to shrug off the Manimal side of him with appearances in Falcon Crest, lunch in Jaws 3D, Wing Commander and The Dinosaur Hunter.

He also made appearances in other genre fare such as Earth: Final Conflict, Poltergeist: The Legacy, Harsh Realm and Relic Hunter. Famously though, he also reappeared as Dr Jonathon Chase one last time in Night Man in 1998,if only he’d done that in Casualty! That would have quite literally put the cat among the pigeons.

You’ll be missed Simon and if it wasn’t for you I’d probably be a black belt in Karate by now as that was on Monday nights but it clashed with Manimal, and that was in the days, 1983, before we had a Betamax video recorder. And so a pattern was set.