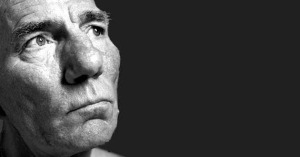 Craggy faced and voiced, the versatile actor, Pete Postlethwaite, who was described by Steven Spielberg, with whom he worked twice, as ‘the greatest actor in the world’ died last month at the age of 64 after a battle with Cancer. Earlier this week his memorial service was held and Dean Newman remembers the man and his movies.

Pete Postlethwaite kept working as he battled the disease, last year alone appearing in everything from Clash of the Titans to Inception and The Town. He first came to world-wide prominence in the Oscar-winning In The Name of the Father, for which he was also nominated, although the eagle eyed may have spotted him amongst the scrum of shaved heads and fellow British thesps in Alien 3 some 12 months earlier.

He cemented his position as one of the cream of British character acting talent however with three very different roles that he will perhaps be most fondly remembered for.

Looking to do for colliery brass band players what The Full Monty did for Sheffield steel workers, Brassed Off saw Postlethwaite deftly mix drama and comedy as the Obi Wan Kenobi of brass band leaders taking, funnily enough, future Obi Wan, Ewan McGregor under his wing.

1996 was a vintage year for the former Royal Shakespeare Society player who was the perfect choice and pillar then for Baz Lurhrmann’s sumptuous Romeo and Juliet with Postlethwaite’s Father Laiurence delivering the memorable ‘two households’ monologue that sets the scene, classic.

From playing an instrument to playing it colourful, Postlethwaite played it cucumber cool as the rather mysterious Mr Kobayashi in the really rather excellent, The Usual Suspects. Hollywood couldn’t really do anything other than sit up and take notice and he worked solidly right up until his untimely death.

Postlethwaite worked across a wide range of genres but he could often be found stepping in and out of the realms of sci-fi, horror and fantasy. Lucky us then. Genre highlights include Dragonheart, The Lost World (clearly channelling Robert Shaw from Jaws), James and the Giant Peach, Aeon Flux, Solomon Kane and the aforementioned Titans, Alien 3 and Inception.

It was almost as if the word gravitas could have been invented for him, a bit like getting Williams to do your score (yes Spacecamp I mean you) or Drew Strazan (hello Masters of the Universe) to whip up a tasty poster for you as no matter how bad the project he would give it that little bit more feeling of class to the proceedings.

The perfect case in point being his memorable turn in The Omen remake, ably filling the dog collar of Patrick Troughton who tries to forewarn Robert Thorn about his Devil son. Heck, I even loved his rhyming voiceover and his musings on mum’s cheesy bake in a certain well known cheese advert!

Being such a presence and class act it’s something of a surprise then that he didn’t pop up at Hogwarts, visit Middle Earth or try to have James Bond bumped off. He would have been perfect in any of them. Rarely bettered in the films he appeared the films themselves were always better for him being there and so was our experience.