AKA Spider-Newman and her Amazing Friends 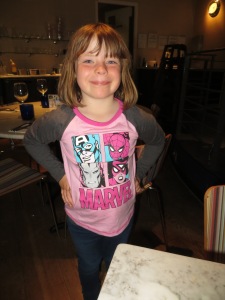 Today Marvel fans we find ourselves in sunny Southend-on-Sea where we join old webhead, Spider-Woman, Iron Man and Captain America at Pizza Express.

Of course any self respecting superhero won’t be in several hundred bounds of Southend as they’ll probably be plenty busy at something like San Diego Comic Con, it was of course Isabelle who had just so happened to have donned a top featuring this fantastic foursome.

Not that it’s that often you hear a peep out of Spider-Woman – or Mrs Spider-Man as Iz called her – so that was a nice surprise for her to pop up on the top and say hi.

Iz’s Marvel-ous pink 3/4 sleeve top displays Captain America, Spider-Man, Iron Man and Spider-Woman, with the two Spider folk sporting a somewhat glittery look over their red. Not sure that will follow in the new reboot. She loved it and knew all of the characters, almost.

And it really set her pink converse off perfectly.

I spotted it in Tesco and was just genuinely pleased that there was a superhero top available for girls and not just another My Little Pony or Frozen, not that there is anything wrong with either of those franchises but it was genuinely refreshing to see that the Marvel universe wasn’t just perceived as a boys only universe. Because it isn’t.

Marvel’s Black Widow and Sue Storm might be flying the flag for Marvel but with the new Supergirl TV series and Wonder Woman sorting out Superman and Batman , perhaps DC may be more female friendly than Marvel? Besides, Iz loves a little bit of Supergirl.

*Clearly I’m not, that’s just how the likes of The Incredible Hulk and Spider-Man and his Amazing Friends cartoons were introduced in the early 1980s.

My brother and I always used to play on the arcades during our family summer holiday,one year it would be The Simpsons arcade machine, the next Teenage Mutant Hero Turtles (as they were so named in the UK first time round). And if memory serves we completed the latter…several pound coins lighter.

One thing that we could never pass up was a shoot ’em up, the only proviso being that it had a gun that you could hold, so whether it was Operation: Wolf, Time Crisis 2 (damn you pesky peddles) or House of the Dead (nice pump action shotgun addition) or Area 51 we were sure to give it a go, all the while perfecting our Martin Riggs/John McClane holding the weapons stance. None of this guns held at the side Tarantino rubbish you understand.

Gavin had always been the one with the better shot, so his pound always lasted longer, with me always having a continue countdown much earlier than he. It was always the same at home as well, he always got further on everything such as Goldeneye at home as well.

And so we spied Aliens: Armageddon, the years may have passed but the oh so serious stances still remained and so was the result, yep, Gavin lasted much longer than me. Long enough even for me to create this little video.

Perhaps he can stick to the shooting and I’ll pen the witty one liners?

It was if time had frozen and we were back in the arcades on holiday almost 20 years ago…not that Frozen silly!!! (sings) Him winning never bothered me anyway!

Easter, the first time Iz has been back to Haven since October last year and boy was she rather looking forward to it.

All of this with the added excitement of gaining an unexpected Frozen bedspread, with Anna and Elsa on her duvet and Olaf on the pillow, it was unexpected as I only went and left all of our bed linen at home!

Bed bits (finally) sorted, Iz typically wanted to do pretty much everything in the first 10 minutes of getting here. 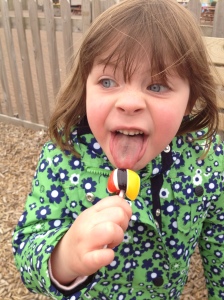 Cue a montage, that practically happened in real time, of Iz hitting the playground (essential and well earned after being so good in the car), heading to the arcades to tick off her first ride, zipping down the zip wire like a Blue Peter presenter auditionee (which saw Iz make her Vine debut), getting some sweets and of course…seeing Anxious the Elephant and the rest of the Seaside Squad.

Or should that have been Anna-cious the Elephant as she gave her own rendition of a Frozen medley, the perfect melding of two of Isabelle’s most favourite things.

Iz then got to pose for the umpteenth time with Anxious, not that it mattered to her as each time feels like the very first.

Dancing was followed by further, you guessed it, dancing to the antics of those Fun Stars and Iz was the proud recipient of a sticker as a reward for her excellent moves, I um taught her all she knows. 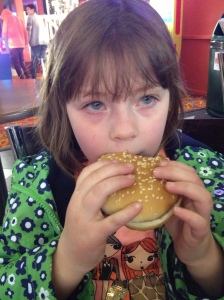 Time for a breather and a burger, practically inhaled, and we headed back to the van with a pooped out little girl, who still found room for a slice of pizza, and then her head hit her Olaf pillow, typically clutching her beloved Anxious as she recharged her batteries for another day of adventure.