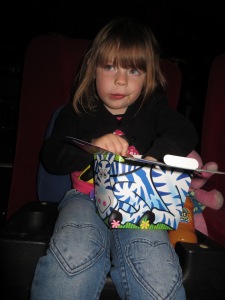 The flickering light in the darkness, the giant images, the noise from all around, once it grabs you the power of the cinema never lets you go. It certainly never did for me, first cutting my cinematic going teeth on Spiderman Strikes Back in the late 70s, a time when people could still smoke in the cinema (I used to marvel how it all used to gather and gravitate toward the path of the projector) and time before Um Bongo adverts (they drink it in the Congo don’t you know).

Walking down the dimly lit main corridor before going through the screen doors – it was lit like the corridors in Westworld – I had the same feeling I got building inside when I’m entering for a new Bond film, walked into Universal – it was like the slow mo The Right Stuff moment.

Now it was my daughter’s time to enter into the darkness and light of the cinema screen, her first trip, a defining moment as – like James Spader when he puts his face into the Stargate – she entered into the auditorium and another world, the world of movies.

As we passed through the double doors into the momentary darkness a tracking shot followed Iz until the seemingly inert grey rectangle screen opened to us and revealed the whole cinema. Suitably epic in scope – cinema scope – we entered just as a suite from Lord of the Rings kicked into motion. For a moment it was as if it was only playing in my head. As we took to the climb to our stairs and to our seats, to Gladiator, it couldn’t have been better choreographed by Danny Boyle. We had arrived and Isabelle’s cinema experience had just faded in…

Smash cut to Iz sat happily in her seat and happily mixing the genres of popcorn and Cadbury’s buttons as they nestled melting atop her sweet popcorn sat between Sarah and I. I’d always wanted Isabelle’s first cinematic experience to be one that meant something, one that was deemed a classic film, as I’d foreshadowed in a blog entry before Iz was born as I think these moments can be life-defining. Here is that very entry, With Great Parental Power Comes Great Cinematic Responsibility.

As such, and because we didn’t quite know whether she was ready for the big screen treatment, we took Iz to the Saturday morning kid’s club screening of Finding Nemo at the Empire Cinema at Basildon Festival Leisure Park. Fittingly she even took to a ‘submarine’ before we went into the screen.

Needless to say Iz loved the whole experience and she may have got a little restless towards the close of the film but she really loved it and gasped and jumped and laughed at all the right places and it was just great to be able to share that moment with her. I think I was probably watching her and her reactions as much as I was the film.

As with all good films, it came to an end all too quickly. As we returned, bleary eyed, back into the daylight of our world we were greeted by cardboard standees of Mike and Sully advertising Monsters University. Iz happily posed with the pair, already being a big fan of the first film, already sowing the seeds of the sequel to her first cinematic experience.