An odd sense of calm reigned in the Newman household this morning. We were up early, flicked round a bit of breakfast news and Sarah even had time to straighten her hair, which she informed me now smelt of peaches.

As the automatic doors of the hospital opened it was as if we had passed through in slow motion like something out of the boarding the rocket scene in ‘The Right Stuff’ or ‘Armageddon’ as we waited to enter the lift to the maternity unit.

It may not have been space or the final frontier or anything but we were certainly going to exploring new worlds where these Newman’s had not been before.

Of course, being the pregnancy it was its all change, keeping us surprised with its twists and turns right until the very end…so why should today be any different? It wasn’t. We were originally listed down as being third in line for a c-section but the Doctor had turned that schedule on its head and Sarah was now only blooming first! Still, at least it gave us very little time to worry about it.

It was now a case of action stations after what had seemed like two weeks of hanging about, there would certainly be no danger of that today. I think it all took us rather by surprise and as Sarah sat in her rather fetching gown and held my hand you could see the concentration in her face, as an athlete prepares for a big race, each mentally prepping themselves for what is to come.

I felt less of a sports person and more Louis Theroux or something, feeling that I wasn’t really able to do much but be there, document it (armed with trusty camera of course) and to reassure Sarah. It turns out that I’m damn good at stroking hair among other calming techniques.

In the delivery room it was all very jolly, in a nice way, with the radio going off in the background and everyone being professional, relaxed and chatty. It had the relaxing feeling of a coffee bar, albeit one where everyone is wearing masks and scrubs. It’s hard  to explain but it was all a far cry from the dourness and darkness of Holby City and somehow, or Korean war aside, had the lightness of MASH with the staff with the joviality and sparking off one another, but always serious in their work, which really helped put us at our ease. In fact the anaesthetist had such a calming voice and manner that he should read talking books.

I think we’ve had more stressful takeaway deliveries than this.  The green screen went up, one side the top half of Sarah and I and the other the surgeons who all melded into one once masked up, Sarah felt a few tingles and as if some washing up was being done inside her. And that’s it.

Sarah’s only stipulation was that she really didn’t want Robbie Williams (sorry Shona) playing on the radio. He did sing but that was prior to it all starting but it was great to get the surprise playing of our wedding song, Chasing Cars by Snow Patrol, just before Izzy was born. You couldn’t have planned it better. 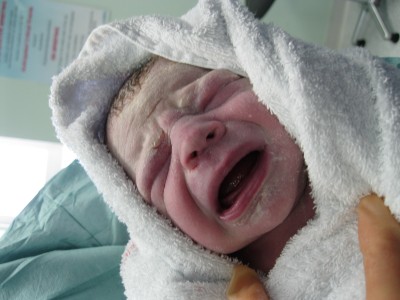 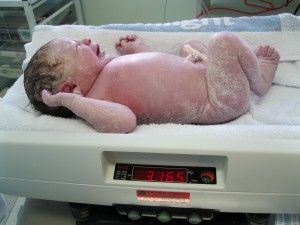 We couldn’t fit many songs in mind as the whole experience (injection aside) took 11 minutes from start to finish – I know, more parcel force than next day delivery. Izzy was born at 10:26 AM and weighed 7lbs.

As already mentioned the music gave the whole proceedings a bizarre coffee shop atmosphere, which being ever so slightly leftfield reminded me of the mass gunfight sequence in Face Off where Castor Troy’s son is spared the bloodshed and carnage by donning headphones and listening to a rendition of Somewhere Over The Rainbow, sounds odd, I know, but it had that same surreal feel to it minus the bullets and the bodies, naturally.

I still don’t think it has all really sunk in yet. Of course we’ve had lots of cuddles and kisses with Izzy but it still seems amazing that we’ve created this gurgling, inquisitive little person that has both elements of Sarah and me about her. She’s seemingly so small you almost forget that she is real…her black poo seemed most real though, which marked my first attempt of changing a nappy, I knew watching Three Men and a Baby several hundred times would stand me in good stead.

I’d always felt a bit helpless and awkward when holding other people’s babies and was initially nervous in how to hold Izzy and not just hold her out at arm’s length. I needn’t have worried though as everything just seemed to slip into place like some unwritten code for dads that are unlocked once you hold your own child.

It was the little quirks that stick out about Izzy at the moment as we get to discover more about her, her full head of hair, her giant inquisitive eyes, that can’t yet quite some to focus on anything in particular, remind me of the cuteness of Gizmo from Gremlins (am sure we’ll be safe to feed her after midnight though) and she’s even got the cute snuffling noises as well.

She’s also the proud owner of a pair of teeny tiny little hands, complete with finger nails and everything. Initially they were a bit purple, poor little mite, which unfortunately reminded me somewhat of Emperor Palpatine from Return of the Jedi, so far she has resisted the temptation to fire lightening from them though. 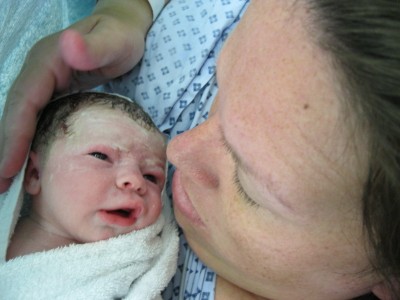 Mother and daughter are doing fine and dad isn’t doing half too bad either now you come to mention it. Dawn of the Dad may have started as a blog in February this year but in many ways this is just the beginning and the past is but prologue. 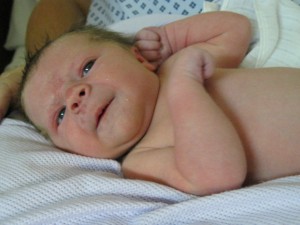