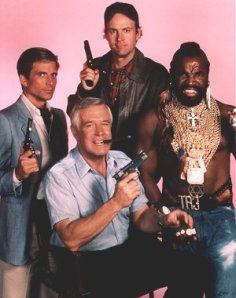 You might have sat there 20 years ago or so with your crisp sandwiches nestling on your knee and seen everything flipping jeep, every uninjured bad guy and every wrong righted on those rose tinted Saturday evenings and now smugly sit back and think, yeah, I know all there is to know about The A-Team. Well, as BA might say, you don’t know nothing sucka!

Ah, the rather wonderfully named Dirk Benedict, who we all already loved from the original Battlestar Galactica, hence the wonderful Cylon in-joke that he double takes at during each title sequence.  Benedict is as synonymous with the show and as recognisable and iconic as the other members of The A-Team, but he wasn’t the first person to play the character of Templeton ‘Faceman’ Peck. 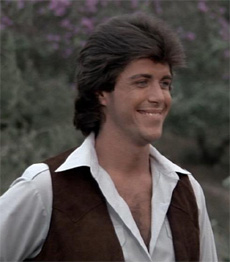 In the shows feature length pilot episode, those oh so familiar exploding jeeps in the titles were pretty much from that, the role of Face was played by that household name, Tim Dunigan. Exactly. He didn’t disappear into total obscurity though as he still keeps busy having appeared in everything from Cheers to Diagnosis Murder and Beverly Hills 90120. He also played the whole of Captain Power and the Soldiers of the Future, which was the first TV series to integrate live action, CGI and digital effects. Nifty, although he clearly didn’t seem to have that special an effect on The A-Team Producers as they thought he looked too young to be a Vietnam Vet 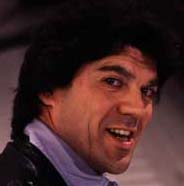 To be honest, he was more Hair than Face and looked more like David Copperfield the magician meets, er, David Copperfield, the unfunny one from the early 80s sketch show with Lenny Henry and Tracey Ullman, Three of a Kind and Coppers and Co. Looking too young to be a Vet wasn’t the problem, it was more about believing that he’d be able to get a helmet over his barnet in the first place. 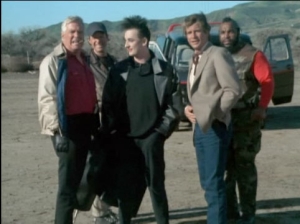 Popstars, they turn up in the damnest of places. The Pet Shop Boys hit Ramsay Street, Kylie hitched a ride with the good Doctor, Adam Ant tried his luck against The Equaliser and Gerry O’Dowd hooked up with The A-Team.  O’Dowd is of course better known to you and I and Boy George! It surely can’t have escaped the programme makers that his most famous song was ‘Do you really want to hurt me?’ Something which could, of course, have been something of an alternative A Team theme!

The season four episode, tellingly it only lasted one further curtailed season, entitled ‘Cowboy George’ was just plain odd and most of the audience probably wished they had been knocked out like BA is prior to flying. George even gets to kick a door down at the end and bond with the big gold-chained fella, bless. There mustn’t have been a dry eye in the house, although they were all probably from tears of laughter.

Change from the old routine

Whether it was because the old routine was flagging or they fancied giving the series one last gap, there were several noticeable changes in series five of the show, including a revamped, grittier title sequence, certainly the first section which looks as hard ass as something like The Unit and a new rendition of the theme tune, as well as a new member of the team, a special effects expert, most useful in an F/X Murder By Illusion style way. 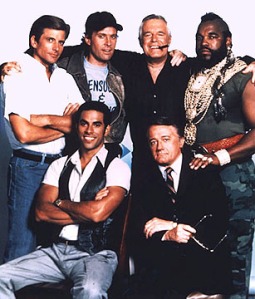 Perhaps the biggest single change though was that The A-Team were no longer working for themselves, they were now working for Napoleon Solo, well Robert Vaughn anyway, who played the rather shadowy Hunt Stockwell, you know he is shadowy by his untrustworthy sounding name. He was basically their version of Michael Coldsmith Briggs III, you know the one in the white suit and eye patch, from Airwolf or Devon from Knight Rider, it gave them someone to rub up against the wrong side of, luckily they didn’t bring Boy George back then!

For several years we had come to know and love the gruff voiced man at the beginning of each episode tell us that The A-Team escaped from maximum security stockade, which in my mind would have been one of the coolest things ever to see.

Turns out that Jim’ll fixed it for me in season five as the Team all got caught, court marshalled and sentenced to death by firing squad, save for Murdock, see what I mean about grittier! We even see them all lined up and blind-folded!! And all this took part over a fantastic three part season opener that was full of some brilliantly tense moments where The Team seemingly don’t all make it. It really is thrilling stuff and perhaps the best A-Team episodes ever made.

Mary Whitehouse still roamed the earth back in the 80s and she could still be guaranteed to moan endlessly about the violence in cartoons and then The A-Team has all these bullets and explosions and no one dies or gets hurt and people still ruddy moan, there really is no pleasing some people. But hang on there, as previously mentioned by series five the rule book had been pretty much thrown out of the window and in its final ever episode a character from the programme is shot and killed. It’s no episode of 24 and it’s not as if he’s been shot to pieces but for The A-Team this was life-changing stuff, it was also perhaps somewhat symbolic as it also signalled the death of the series.