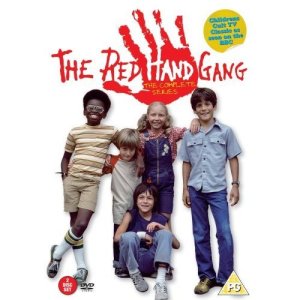 It was almost as if it had never left. I had remembered the titles with the gang members jumping up and down in the air in slow mo and the fantastically named James Bond III, but that was about it, until I popped in the DVD of the complete ‘The Red Hand Gang’.

It also reminded me of how my younger self was confused by the very being of James Bond III as, besides him being a young black kid with an afro, he couldn’t possibly be James Bond III as even I knew at that age that the third James Bond was of course Roger Moore! Today he, that’s James Bond III and not Sir Rog, sounds more like Whoopi Goldberg in Ghost!

In truth there were only ever 12 episodes – and only two cases – of this Hardy Boys meets The Famous Five (dog included of course) late 70s programme, that, for some reason, seems to be more memorable to British viewers of a certain age than their American counterparts.

I may have only remembered scant details of the show but once those episodes started playing out those dormant memories of how the series thrilled came back in an instant.

Needless to say I was hooked and after only intending to watch one episode to see how it held up I soon found myself watching all the first six episodes and was as gripped today as I was when I was little as each episode seemingly peeled away the years.

The story focusses around the Gang stumbling across a young boy who has been kidnapped and spy him and his captors. Unable to convince the police they follow and set about foiling the kidnappers themselves, one of the delights of which includes Anthony Zerbe, as seen in the likes of The Omega Man and Licence To Kill. Okay, so it’s not exactly award winning television but as a youngster it was probably one of my first examples of ‘mild peril’ next to things like Scooby Doo, and this was bonafide live action.

Viewed today it is simple but solid storytelling and harks back to a bygone age of television that lingered a little and took its time to unfold, like another programme of that time, The Littlest Hobo.

One of the elements that struck my most was the evocative music featured in the episodes, it really helped rack of the tension and even had a Lalo Schifrin Dirty Harryesque feel about it. The title music wasn’t as effective in those stakes but was insanely memorable and seemed to share a thing or two with the Banana Splits theme.

I’m already looking forward to my second marathon which promises lots more intrigue, men in bandages and plastic surgery. I’ve not enjoyed being part of a gang so much since The Goonies and this deserves to be discovered by a whole new generation. There could be worse things then than a remake for today’s audience, the only question is should it be updated for today or stay in its original 7os setting?

One thought on “Seeing Red: Remembering The Red Hand Gang”